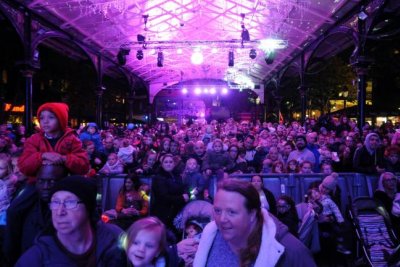 WARRINGTON’S Christmas lights switch on will be taking place on Friday, November 8, as part of a host of festive attractions at Golden Square.

The theme for the evening, kicking off from 4.45pm, will be The Greatest Showman complete with a fire performance, aerial acts and an acrobatic duo before Santa flicks the switch at the end of the celebration.

A spokesman said: “Torvill and Dean wannabees will be able to glide their way across the ice until January 5, all under the cover of the fabulous Old Market Square.

“There will be various different skating sessions available to suit everyone; from parent and toddler time slots, to music-free skating for those who appreciate a quieter visit as part of the centre’s commitment to being fully inclusive to everyone.”

Shoppers will also be able to explore various Christmas huts, which will be alongside the rink where mulled wine and festive snacks will be on offer.

Golden Square’s restaurants and bars will also be getting into the spirit of things and remaining open until late.

The Christmas programme continues with the arrival of Santa and his famous sleigh on December 16.

Father Christmas will be travelling around the shopping centre, greeting children and finding out what’s on their present list until until Saturday, December 22.

Santa will even be joined by two rapping elves on Saturday and Sunday, December 21 and 22, who will be entertaining visitors in the build-up to the big day itself.

An interactive game – with the chance of winning prizes – will also be at Golden Square from November 8.

Located by The Fragrance Shop, the memory game will challenge players to copy the Jingle Bells tune.

The Christmas lights switch on is free to attend.

Tickets for Icescape are from £6 with family tickets available.

To book, or for more visit icescape-warrington.co.uk