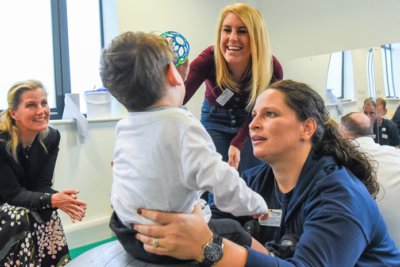 SOPHIE, Countess of Wessex dropped in at the Warrington centre of charity group Brainwave to celebrate the site’s 10-year anniversary.

The Countess opened the centre  at Birchwood in 2009 and since then it has helped many children with disabilities achieve greater independence by delivering a range of physical and educational therapies.

There was much to be celebrated as the Countess presented Natalie Preston with a Certificate of Appointment as an Ambassador of the charity.

Natalie who is living with cerebral palsy and has been attending Brainwave since she was two years old, recently climbed over The O2 Arena with Olly Murs to raise money for the charity. So far, she has raised over £18,000 for Brainwave.

The Countess also presented Phil Edge, former Brainwave CEO, with a Certificate of Outstanding Service. Phil, who recently retired from Brainwave, had been with the charity for over 33 years. He spent many of his years at Brainwave as a physiotherapist, helping hundreds of children with disabilities achieve their potential.

In recent years, Phil has been leading the charity as CEO but decided it was now time to pass on the baton. A new CEO will be joining the charity in the New Year.

The Countess of Wessex has been president of Brainwave for many years. The UK charity does not receive any government funding and relies on voluntary donations to run its three permanent centres in Warrington, Somerset, Essex and Warrington.

To find out more about Brainwave, visit: brainwave.org.uk