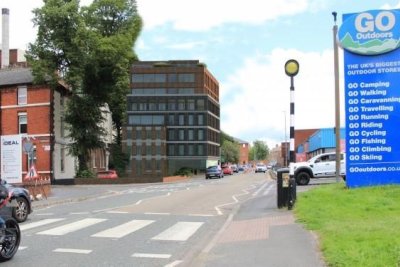 A FORGOTTEN part of Warrington town centre could be turned into plush new affordable flats.

Developers are looking to put an eight-storey apartment block off Wilson Patten Street close to the former BT telephone exchange building – described in the planning application as an 'ugly, concrete monolith'.

It would be home to a mix of 40 one, two and three bed flats on the spare land which is currently used as a car park.

Developers say they have been in discussion with Warrington Borough Council planners for two years and that site would be '100 per cent' affordable.

Planning documents state: "This application seeks to relieve the dominance of the BT exchange by providing a building which mediates between the lower height buildings within the conservation area, ties-in the two areas with appropriate materials and reduces the visual imposition of the telephone exchange by providing an attractive and well-designed mixed-use development.

"The new building will be of brick construction with intricate brick detailing to cornices and details to the facades to link its identity to the Conservation Area.

"The simplicity of the façade also links back to the Georgian buildings on Stanley Street with the simple repetition of the windows and proportions acknowledging their historic neighbours.

"We conclude that on balance, the benefits of the proposals materially outweigh any perceived heritage harm, which is limited in any event."

The scheme would include a 'commercial' unit on the ground floor.

There would be two, three-bedroom flats, 10 two-bed homes and 28 one-bed apartments.